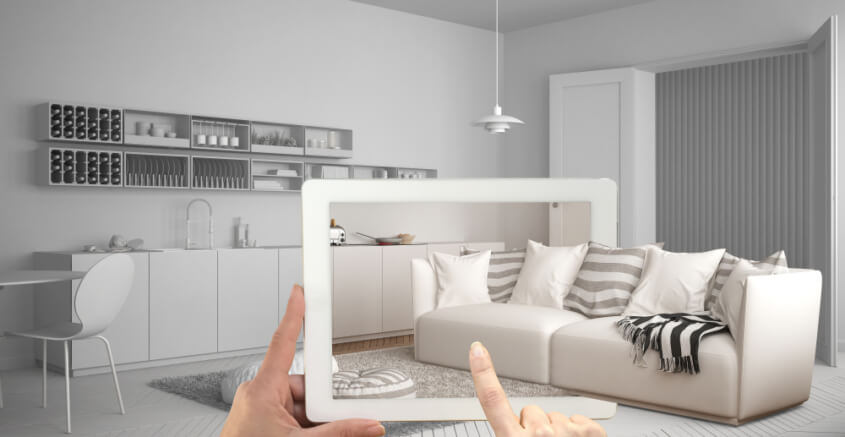 Of course, now we know better. Currently, many of the world’s most well-known brands are using augmented reality to improve their marketing efforts beyond anything that was ever possible before.

If your company has yet to do the same, you’re unnecessarily limiting your marketing plan’s potential.

The Digital Age has seen more possibilities for marketers than any time period before it. Between the Internet and smartphones, companies have countless options for engaging their markets. With augmented reality, it’s become easier to make this engagement even more effective – leading to increased conversions.

Here are four examples of how augmented reality can do the same for you.

Though AR has proven to offer a number of very pragmatic benefits, it shouldn’t be ignored that AR is also still a lot of fun. That’s important for marketers to keep in mind.

For example, Cadbury has been making delicious confections for nearly 200 years. No Easter basket is complete without one of their famous creme eggs, and they still run a beloved commercial from 1985.

Nonetheless, Cadbury still used AR for a Christmas promotion that offered a new filter for every day of the Advent calendar. Customers enjoy the novelty of using AR each day of the season, and Cadbury wins because these customers then go and share the images on social media. That’s free marketing for them just for providing a new, fun experience.

Though a completely different company, Kate Spade, recently did something similar. The high-end fashion brand launched an AR app, My Little Paris Tapage, that acted as a tour guide for those visiting the City of Light.

Again, did the app directly market the brick-and-mortar store the company was promoting? No, but it was a lot of fun, which was enough to generate sufficient buzz for the opening of their shop.

2. Personalization Has Become More Important Than Ever

The next evolution in online marketing is to add personalization to your website. In short, personalization is the practice of providing a customized experience to each unique visitor. So, for example, instead of every customer seeing the same selection of a company’s inventory, they see only those products they’ve proven to show interest in.

74% of companies that use personalization as part of their marketing strategy have enjoyed an increase in sales. It’s hard to think of any other single change a business could make that would reliably improve their profitability like that.

That’s probably why Anthropologie turned to AR to transform its online inventory into a customizable furniture library. The company turned 96,000 items into 360-degree images that can be viewed in 3D.

What’s more, shoppers can then choose from style, color, and fabric options – among many others – to customize the experience further.

Best of all, using AR, shoppers can actually see what the furniture would look like in their homes.

It doesn’t get much more personalized than that.

3. Apple Has Made AR Accessible to More of Your Market

Not enough can be said about Apple’s role in bringing augmented reality to the masses. Much like the iPhone helped skyrocket the popularity of YouTube, Apple is now doing the same for AR.

When Patrón launched their augmented reality app, the tequila company’s VP of marketing was asked what their reasoning was. He responded:

“Augmented reality has been around for over a decade, but now it’s ready for mass consumption. With the release of the new Apple iOS 11, augmented reality became a native feature on their operating system. In the past, you had to download an AR app, and then find the brand experience, etcetera, so that you were finding a door to a door to a door. Now, with Apple’s immense consumer reach, AR is easily available on a mass scale. It’s ready for prime time.”

Apple remains the most popular smartphone manufacturer, meaning most of your market probably has a device in their pocket that is capable of synching with your company’s AR experience. This has played a major role in so many big brands adopting AR. It’s become clear that augmented reality and mobile marketing will soon be nearly inseparable.

4. Adding AR to Your Current Product Is Easy to Market

Despite how popular AR has become, there are still plenty of people who haven’t experienced a polished version of it.

Many of those people may be in your market.

Even among those who are familiar with AR, you can deliver a unique experience unlike any they have enjoyed before – and market it as such.

A few companies have already done this exceptionally well.

A lot can be learned from how Target used AR to double their Christmas tree sales this year. Instead of estimating the size of a tree, ordering it and possibly being disappointed when it’s unboxed, customers can get a better idea of what it will look like in an actual setting before placing an order. AR demonstrations and 360-degree views of products help to manage customer expectations, and likely lead to fewer product returns.

It’s not just major brands. Currently VacuumCleanerMarket.com is using our AR eCommerce solution to increase conversions during their holiday sales. During a highly competitive time, it’s difficult for consumer to make confident decisions. Using the AR viewer on the product page, allows potential customers to instantly preview the vacuum without the use of the app.

None of the companies in these examples actually changed what they were selling. They just added augmented reality to a part of the offering, which was enough to improve their marketing efforts. It wouldn’t be surprising if they actually reengaged former customers whose interest was rekindled by the promise of an AR experience.

Augmented Reality Could Become Your Marketing Plan’s Most Powerful Asset

As you can see, unless some of the biggest brands in the world are very mistaken, augmented reality is an extremely powerful marketing tool. Expect to see even more household names adopt it in 2019.

Will your company be one of them?

Whether you’re ready to take action or still have a number of questions, NexTech is here to help. Contact us today and let’s discuss how AR can play a major role in your business’ marketing success.